In your law firm (or any business), you need reliable tools for creating documents, spreadsheets, and presentations. But with the large number of options that continues to increase, how do you choose? In this post, our latest in the Collaborative Law Firm series, we describe the key features and pros and cons of some of the most popular options, including Office 365, Google's G Suite, WordPerfect Office, OpenOffice, and more.

As we work our way through the software and services essential for promoting law firm needs collaboration, we’ve talked about Instant Messaging, Multi-User Chat, and Email Hosting. Now we’ll address that class of software you’ll most likely use more than any other: productivity suites.

While Microsoft Office is the most popular office productivity suite, and the one you are most likely already familiar with, it isn’t the only game in town when it comes to documents, spreadsheets, and presentations. 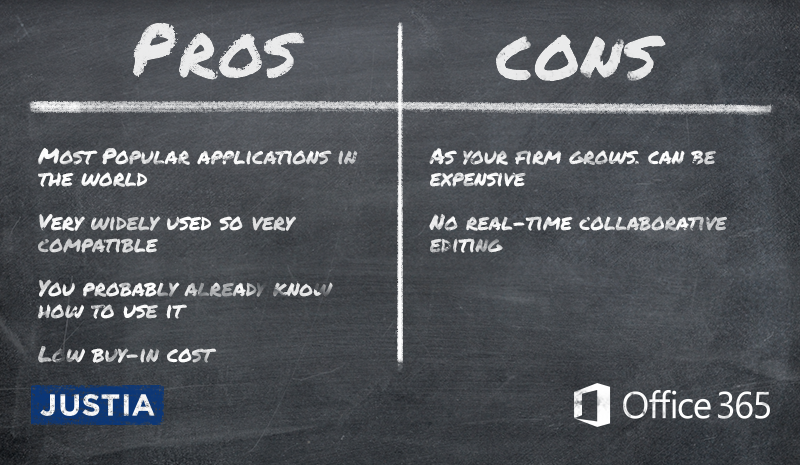 Let’s go ahead and get Office out of the way first. The first version of Microsoft Office was first released in October 1990, but the individual components of it go back all the way to 1983 with the original version of Microsoft Word for MS-DOS. It took a while for Microsoft Word to become the most popular word processor. In the early years, WordPerfect was the king of the word processors, and Lotus 1-2-3 ruled the spreadsheet world.

For years, Microsoft Word and Microsoft Excel languished behind the more dedicated applications from companies that focused primarily on single products, but by the mid 1990s, Microsoft had closed the gap. Offering a full suite of productivity applications, Microsoft Office became the most popular suite of software in the world, while WordPerfect was later sold to Corel (more on that later) and Lotus 1-2-3 faded into obscurity.

Microsoft has continued to invest in Office over the years, and it is still one of Microsoft’s most popular products.

For your law firm however, you should consider getting the business version of Office 365. For $8.25/user/month you get access to Outlook, Word, Excel, PowerPoint and Access, as well as 1 TB of cloud storage with Microsoft OneDrive.

If you prefer to have your email hosted by Microsoft (an option discussed in our last article in this series) you can get both the office applications AND hosted outlook.com email on your own domain for $12.50/user/month.

Microsoft Office applications are still excellent; however the desktop applications do lack the real-time collaboration functionality of some of the alternatives. 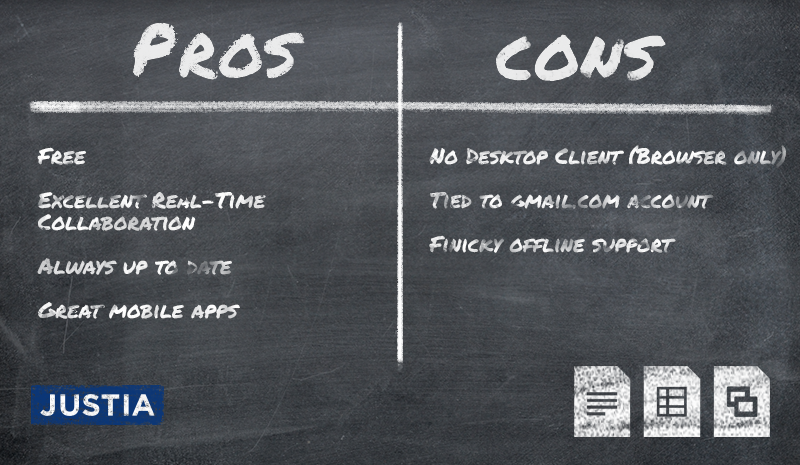 Every free Google account includes unlimited access to Google Docs, Google Sheets, and Google Slides (collectively Google Apps). These applications allow you not only to create documents, spreadsheets, and presentations, respectively, but you can also open, edit, and save these files made using Microsoft Office. All you need is a web browser, an internet connection, and a Google account. Google also offers apps for iOS and Android that allow for seamless viewing and editing of your documents across devices.

The free version of Google Apps includes 15 GB of online storage in Google Drive, which is also shared with other Google applications (including Gmail). Users can purchase additional storage with Google One.

Where Google Apps really shines is in real-time collaboration. You can share your documents, spreadsheets, and presentations with other Google users, and unlike with Microsoft Office applications, multiple users can edit the same document simultaneously. As you work in a shared document, you can see what other users are doing in the same document at the same time, making collaboration extremely easy. 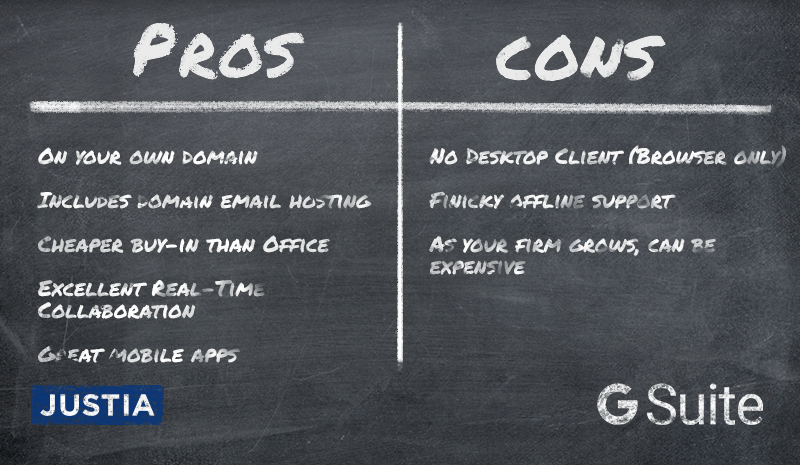 While Google Docs, Sheets and Slides are free, businesses can purchase Google’s G Suite, which adds administrative controls over access to documents and provides additional storage space over the free versions. G Suite also offers email hosting at your own domain (as discussed in our previous article), as well as the ability to use these applications on your own domain with 24/7 technical support.

The G Suite Basic edition is $6/user/month (the price just went up; it had been $5/user/month for several years). The Basic edition increases the base storage to 30GB per account (note that documents created in Google Docs, Google Sheets, and Google Slides do not count towards that storage limit, but Microsoft Office files uploaded to your Google Drive do).

If you need more storage, the G Suite Business edition for $12/user/month provides unlimited cloud storage (1TB if you have fewer than five users), adds archive and retention policies for your email and offers eDiscovery tools for emails, chats, and files to help address compliance concerns your firm may have.

Larger firms may opt for the G Suite Enterprise edition for $25/user/month, which adds a number of security features and even more eDiscovery tools. 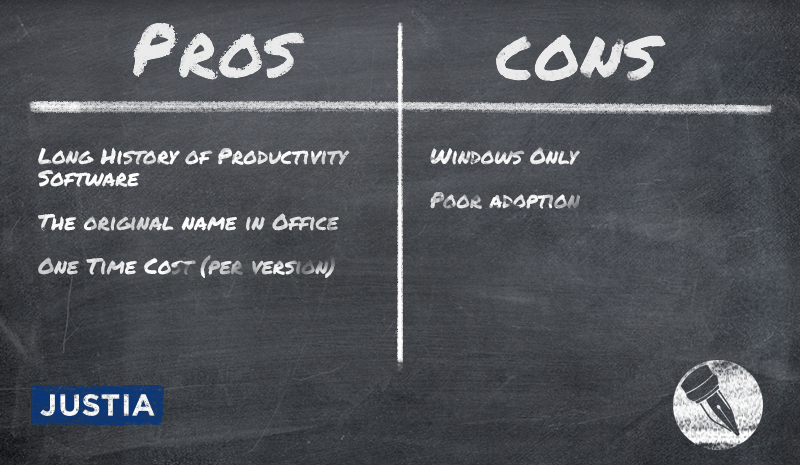 Before Microsoft Word even existed, WordPerfect was by far the most popular word processor for MS-DOS based computers in the 80s and early 90s. The WordPerfect company was sold to Novell in 1994, who sold it to Corel in 1996. While WordPerfect no longer dominates the market as it did in the 1980s, Corel still makes and sells WordPerfect as part of its own Office Suite in three editions (currently): WordPerfect Office X9 – Standard Edition is sold for $249.99, a Professional Edition for $399.99, and a Home and Student Edition for $99.99.

Prospective users can often find all of these editions on sale for less, and owners of previous editions are eligible for a discount on an upgrade version. While the initial investment is higher, the upside is that the cost is one time and incurs no ongoing cost until you wish to upgrade to a new major version (i.e. WordPerfect Office X10).

At the current time, WordPerfect Office is only available for Microsoft Windows platforms. 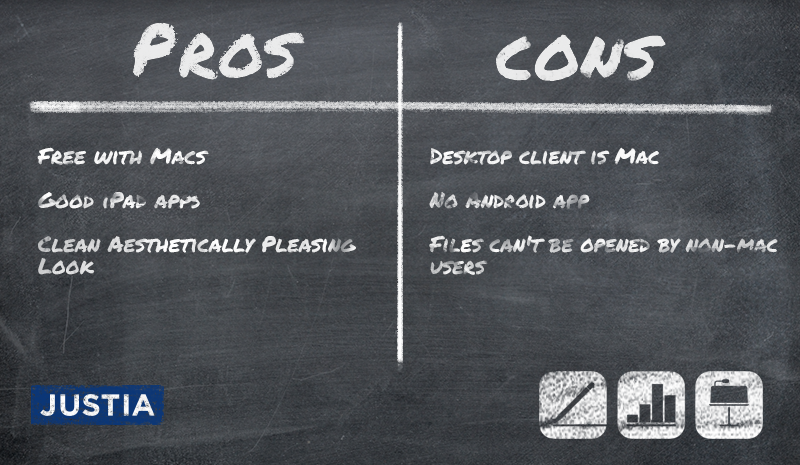 Macintosh, iPhone and iPad users can download a free copy of Apple’s iWork software suite, which includes Pages, Numbers, and Keynote, from the Mac or iOS App Store. On the plus side, unlike Microsoft’s and Corel’s options, there are no upgrade or subscription costs to use iWork. The downside, however, is that the iWork apps are only available to Mac and iOS users, so PC users cannot natively use iWork and may face challenges collaborating with people who do use iWork. Apple also offers iWork for iCloud, which offers slimmed down versions of their apps in a web browser, similar to Google Apps, giving Windows users a limited option to loading and working on iWork files.

iWork applications are visually appealing, and are powerful tools for creating more visually oriented documents such as brochures, flyers, and slide presentations. If you work solo or only with people who use Apple products, iWork might be a good fit for you. Apple is renowned for its graphical design aesthetic, and iWork does not disappoint in that regard. Plus, it’s hard to beat the price of free. 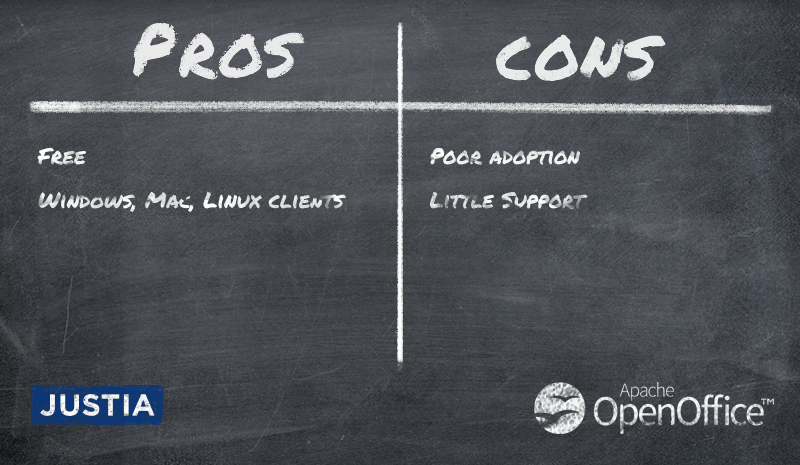 In 1985, Star Division, a German software company, released a word processing application called StarWriter. Over time, it developed its offering into a full office suite for CP/M, MS-DOS, OS/2 Warp, and Microsoft Windows under the name StarOffice. Sun Microsystems acquired Star Division in 1999 (reportedly, buying a whole company that made an office suite was cheaper than purchasing 40,000 licenses of Microsoft Office). Sun continued to develop the application until Oracle acquired Sun in 2010. Oracle rebranded StarOffice as OpenOffice.org (the .org was part of the name) and released it under a Commercial Open Source model (with an Open Source version and a Commercial Support version as well).

In 2011, Oracle discontinued the commercial version and spun off the open source version of OpenOffice as a purely community-based project, donating the code and the domain to the Apache Software Foundation. The Apache version of OpenOffice is still being developed and is available for free download at the openoffice.org website.

OpenOffice is available for Windows, Mac, and Linux platforms completely for free, so if you really want local offline document editing but are looking to save money over commercial applications like Microsoft Office, OpenOffice may be for you.

While we have discussed some of the most popular options, this list is far from comprehensive. There are other web based suites available from companies such as Zoho, Nuclino, and Zimbra, and there are other desktop applications out there as well like LibreOffice and AbiWord. We hope you found this article helpful as you consider what productivity platform is right for your firm. 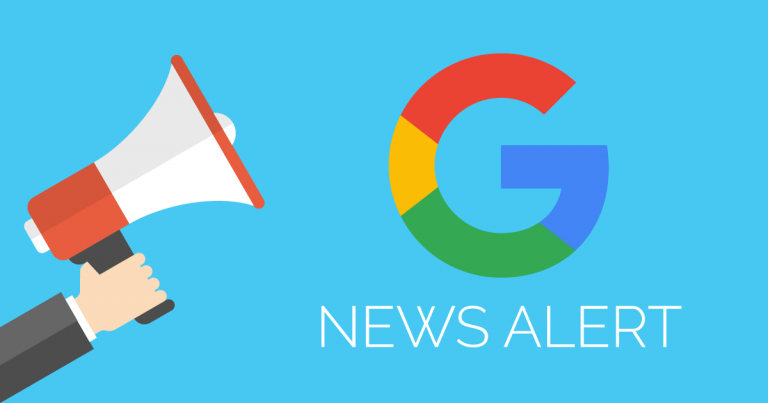