Google's Accelerated Mobile Pages project has continued its forward momentum over the last year, and as such the time has come to review the changes to the platform in that time. With new features, new partners, and updates to existing features, AMP isn't going away anytime soon.

One year ago, I wrote a post about Google’s Accelerated Mobile Pages (AMP) Project. AMP has seen a lot of changes since then, and we wanted to highlight a few of them here to make sure you are up to date on what is happening. 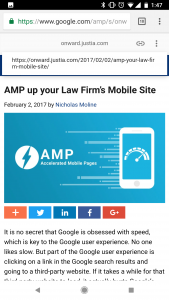 At the time of writing last year, Google was working on addressing the concerns of site owners that users were unable to access the original URL of pages when they visited the AMP page from Google Search. That feature came out just days after we published our post. Now when you are on an AMP view of a page, a paperclip icon on the AMP Viewer Header bar now gives you quick access to the original URL of the page.

In addition, now when using the Google Search app on your phone (instead of a web browser) the share link will always share the original URL, regardless of whether the page was loaded as AMP or not. Users of the Chrome mobile browser will also share the original URL as opposed to the AMP URL when using the browser’s native share feature, thanks to the Web Share API which was added to Chrome in Chrome 61. If the Web Share API is added to other browsers, it will work there as well.

In March, Baidu and Sogou, the two largest search engines in China, and Yahoo Japan all announced their support for the AMP protocol in their search engines, which vastly extends the reach of your AMP enabled pages around the world. For immigration lawyers and others with an international audience, this is particularly good news as it means that the same performance improvement that Google users get from your AMP pages is extended around the world. Bing had already added support for the AMP Protocol to their mobile apps back in late 2016.

In May at the Google I/O Developer conference, Twitter announced that they would use AMP cache when people click on links from Twitter to pages that have AMP, expanding the AMP reach to social media.

One of the early complaints about AMP was that it was only good for static content. The AMP team has worked hard over the last year to address this by adding more interactive features. amp-bind allows for content on the page to change after loading based on user interaction, and amp-install-serviceworker lets AMP pages become a serve point for full-fledged progressive web apps.

For webmasters who like to track phone numbers, the AMP project added amp-call-tracking to support the feature. All of this in addition to the powerful amp-form we mentioned in last year’s post, makes it possible to have fully interactive websites that are also AMP compatible.

In September, Google’s AdWords platform announced support for serving landing pages through Google’s AMP Cache when an AMP page is set as the landing page for an AdWords campaign. This significantly improves performance for users clicking on your CPC/PPC ads on Google and Google’s AdSense platform. For many, this increases the ROI for pay-per-click spend, as users are less likely to leave the landing page before reading it.

While AMP is often referred to (even by me in this very article) as a Google project, it is an open-source platform with contributors from around the world. In an effort to bolster the community further, Google announced this week that it is changing its schedule of their weekly design review meetings to run at a different time each week so that it is easier for community members from around the world to join in at times that are more convenient for them.

Back in September, they announced the AMP Roadshow, bringing mini versions of their AMP Conf they held last March to cities around the world.

Speaking of the AMP Conference, the second annual AMP Conf is coming up on February 13 and 14. Held in Amsterdam this year, this two-day conference is sure to have lots of new developments from the AMP team and we’ll be sure to keep an eye on it for developments that you may find interesting.

Google and the AMP team have built a great momentum for the Accelerated Mobile Pages project, and we at Justia fully support their efforts. We have enabled AMP for all of our client websites and blogs, and we continue to stay on top of new developments in the standard and adapt our implementation as new functionality is added. If you haven’t yet added AMP to your law firm website or blog, make sure you partner with a marketing organization that understands and works with the latest web technologies like we do at Justia.

3 Key Things to Remember When Hiring a Legal Content Writer for Your Law Firm Website or Blog August 10, 2022