There are many communication options beyond traditional office memos, email, and telephones. In a previous post, we discussed instant message services, which have certain advantages and disadvantages for professional teams. In this post, we compare several team-based chat applications that are specifically designed to facilitate communication within and among teams in organizations of various sizes. We review a few of the most popular, and most feature-rich applications in this category and describe the pros and cons of each.

UPDATE July 27, 2018 — Atlassian, who made both Hipchat and Stride, has announced they are discontinuing both products and will be migrating the userbase over to Slack as part of a “partnership” between the two companies.  As such Hipchat and Stride are no longer viable services for multi-user chat for your firm.

In my previous post in this series we discussed instant messaging services that you can use to communicate with your colleagues in real time even when they are in different locations. Sometimes however you may need to either communicate with a group of people at the same time or to have a long running ongoing conversation that people can join and leave as they need to. These circumstances are when you want to move from a one-on-one instant messaging application to a group- or team-based chat application.

By far the most popular chat service these days is Slack. While far from the first such service to exist, the four-year-old technology company has managed to explode in popularity. Built to be familiar both to users of classic chat networks like Internet Relay Chat (IRC) and more modern collaborative applications like Google Docs, Slack does a great job of going beyond chat to build truly productive working environments.

Slack’s signature feature is the vast collection of third party integrations that make Slack work with other services you may already be using. While this functionality is not unique, Slack has made integrating with third parties dead simple. From integrating with video conferencing solutions, to pulling tweets into a conversation in real time, to notifying you of new comments in a Google Doc file, the integrations in Slack make things that are inherently not conversational into something real time and collaborative. 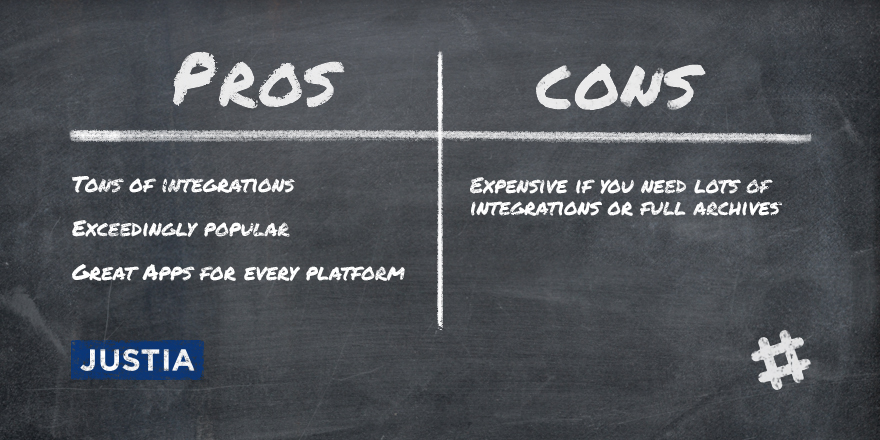 Long before Slack became the most popular game in town for chat, there was a company called HipChat founded in 2009 that offered an extremely similar service. Like Slack, HipChat offered a multi-user chat system built on a familiar interface to those who have used IRC. Apps existed for Windows, Mac, Linux, iOS, and Android, and like Slack, HipChat supported many third-party services.

Perhaps HipChat arrived on the scene too soon, before the market was ready for the product, but it never gained the type of traction that Slack had even though it offered the same functionality at a lower price. Many attribute this to the aesthetics of the user interface. In 2012, HipChat was bought by Atlassian, who is best known for Jira, a project management application designed for software developers, and the developer focus shown through their user interface design for HipChat. Non-developers found the user-interface of HipChat confusing, and it never gained traction outside of IT departments and engineering teams.

Slack on the other hand put a huge focus on design and user interface, and was seen as much easier to use by all sorts of people, not just software engineers.

In response to this, Atlassian went back to the drawing board and on September 7, 2017, announced that it was discontinuing its hosted HipChat service and replacing it with a brand new product called Stride. Stride has a completely new UI redesigned from the ground up to be simple. While it still supports third-party integrations like Slack does and HipChat did, Stride has some additional functionality built directly into the user interface. For example, Stride has built-in task management, with the ability to put checklists and tasks directly inline, and assign them to other members of the team. It also facilitates decision making with features like inline image annotations and polls.

Stride is currently in pre-release, but it looks like it will be a worthy competitor to Slack when it comes out. Like Slack, Stride offers a free plan with unlimited users that limits the number of third party integrations (10) and the amount of message history that can be searched (25,000), as well as a paid plan that removes those limits and adds additional functionality like screen sharing and remote desktop. Stride’s paid version is $3 per user per month.

Since the release of Slack, dozens of services have sprung up trying to improve on Slack’s model. When researching this article I came across posts such as “27 Top Slack Alternatives in 2018.” It quickly became clear that listing every single Slack alternative would make this article unwieldy, and may not even be possible as there are so many, so I’ll just give you a couple more.

Flock came out in 2014 (a year after Slack). From a price point of view it is very competitive. Their free tier offers unlimited integrations, unlike both Slack and Stride, and their paid tier is just $3 per user per month, the same as Stride. Flock has some interesting built-in features, such as a shared task management system. However, Flock lacks the third-party integrations that Slack and Stride have. While Slack has hundreds of integrations, Flock only has 48 (that I can see), but among those 48 are all of the most popular ones available on Slack. Unlike with Slack, on Flock you could install all 48 on the free tier if you wanted to. 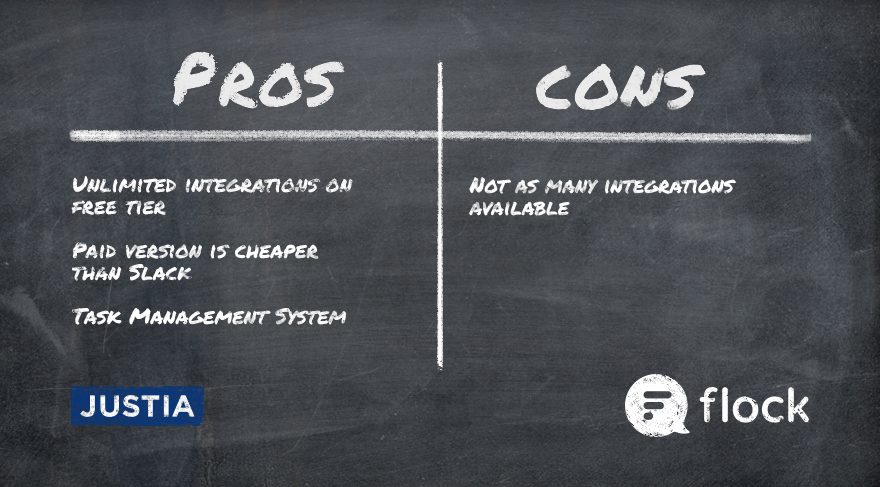 Chanty is a very new service currently in beta that adds artificial intelligence (AI) over the top of a compelling alternative to Slack. What this does is allow for automated predictive responses to questions. Similar to Gmail’s smart replies feature that helps you pick an automated response to a question, Chanty analyzes the context of questions people ask you and gives you options of one click responses. The goal is an attempt to speed up your chat by letting you type less. Unfortunately as they are in private beta, it is difficult to say how useful this feature is, and their final pricing is unknown (though they claim they will be more affordable than Slack). 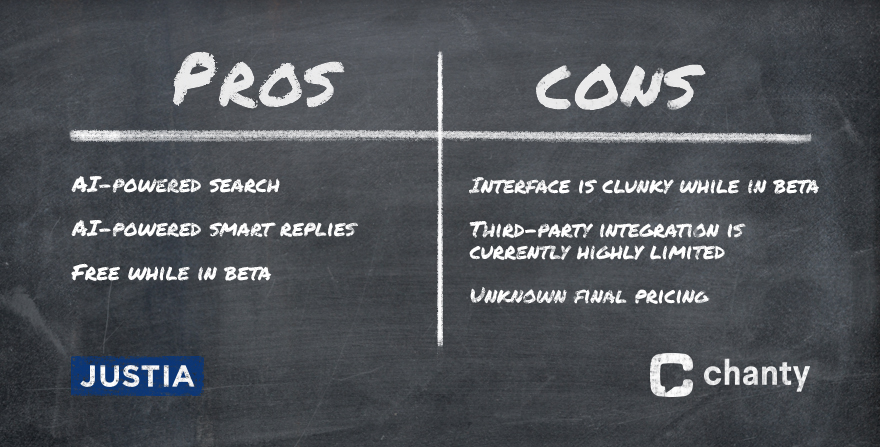 Particularly with smaller teams, the same service you use for instant messaging may work fine for group conversations. Several services mentioned on our previous list also support team-based communications, and in some cases add some interesting functionality to it.

Google Hangouts already supports multi-user chat natively, and teams around the world use it for collaboration. The ability to embed documents, multi-platform support, and Google-powered search inside Gmail make it a natural for keeping track of of online correspondence.

Google announced last year that it is splitting Hangouts into two separate services. Hangouts Meet is Google’s new video conferencing platform, and it is live now; Hangouts Chat is the replacement for the instant messaging portion of the application. Google is clearly taking inspiration from Slack with the redesign. Like Slack, Hangouts Chat has both channels for group chats and private messaging for individual chats. It also allows integrations with third-party services, and even has its own bot. Slack’s Slackbot is a configurable interface that you can talk to. For Hangouts Chat, Google brings in the power of the Google Assistant with its @meet bot.

Hangouts Chat (and Hangouts Meet) will be included with all G Suite service packages, which start at $5/user/month. 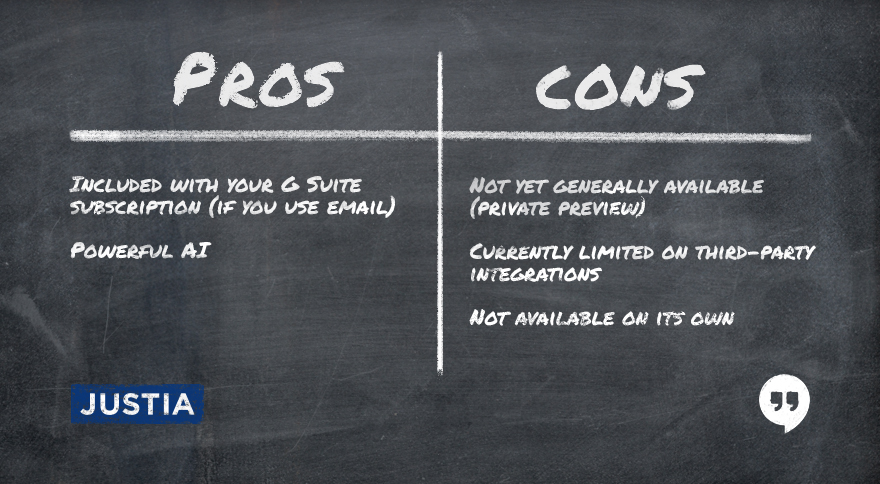 Teams have been using Skype for team meetings for a long time, and after acquiring Skype, Microsoft was quick to add more collaborative features to make it an enterprise-grade chat and video conferencing application. Group chats support collaborative features like polls and Q&A, and if you need to move the conversation into more real time, any group chat can become a group video conference with a click of a button. 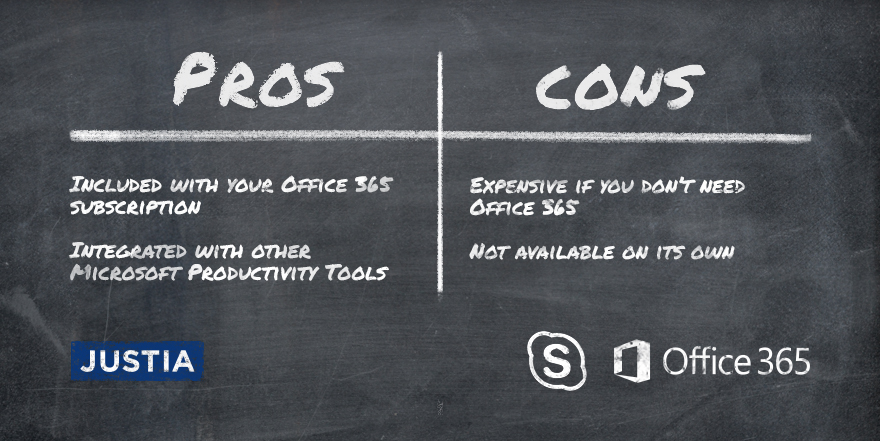 As I mentioned above, Slack was built to emulate certain functionality from the Internet Relay Chat (IRC) protocol, and supports connections from IRC clients, but if you want a completely private (and free) multi-user chat system in your own business, you can run your own IRC Server on a server in your office.

Once you’ve setup your own IRC server, you can connect to it with any number of IRC clients. For Windows there is mIRC and Hexchat, for MacOS X there’s Colloquy and Textual. There are also completely web-based clients like IRCloud and Mibbit, which allow you to chat without installing any programs on your computer at all. For connecting from mobile, there are clients like Mutter for iOS and Hermes for Android. All of these clients can also connect to Slack if you like Slack’s service but aren’t fond of their apps. 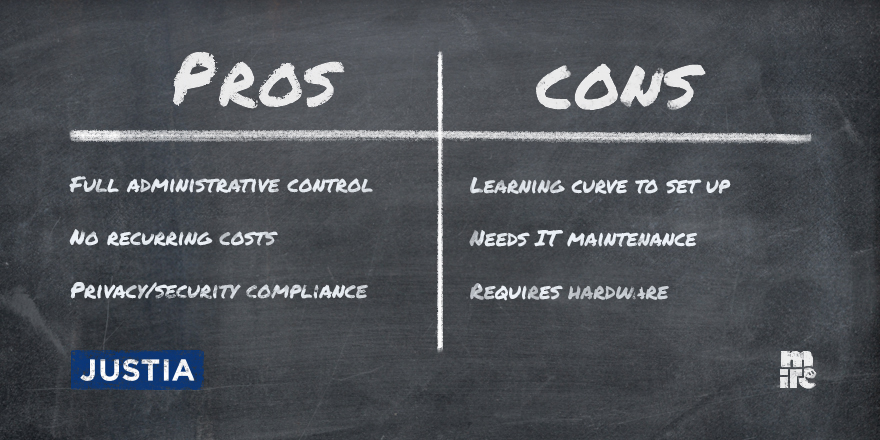 And so ends another entry in the Collaborative Law Firm series. The next post in this series will be all about email. Our clients often ask us for suggestions on what they should do to get email on their domain. We’ll share the advice we give our clients, and expand upon it to help you get your email up and running in no time.