Google mentioned that the reason for the change is to allow advertisers to better focus on user intent, which in turn helps them more easily reach their desired customers.

HOW PHRASE MATCH AND BMM WORK NOW: Currently, Phrase Match requires that words (or similar words, like “attorney” and “lawyer”) appear in the same order as in the phrase, while BMM just requires the words that it is matching to be anywhere in the phrase. Thus, a Phrase Match of “NY Injury Lawyer” would match the term “I need a NY injury attorney” but would not match “I need an injury attorney in NY.” The reason is that currently, the order of the terms in Phrase Match matter. Meanwhile, the BMM keyword term of +NY +Injury +Lawyer would match on both of these searches, since the order of the terms is not important for matching search queries.

WHAT WILL HAPPEN TO BROAD MATCH MODIFIER (BMM): As noted above, BMM will be phased out by Google Ads by the end of July. In the meantime, BMM will also move toward the new intent-focused matching behavior before it is permanently deprecated. We will be recommending to our clients that they move to the new Phrase Match once it is released, since it basically does the same thing as BMM for nearly every search phrase on which our clients focus, and we will want to start working on improving the quality score for the new Phrase Match terms as soon as possible.

GOOGLE ADS TO BE MORE FOCUSED ON INTENT OF QUERY WHEN MATCHING WITH PAID SEARCH TERMS: Google is also going to be much more focused on the intent of the searcher and whether that matches up with the search query.

Google shows some examples on their Google Ads support pages about how this new intent focus for the updated Phrase Match will work (starting in two weeks) compared with how Phrase Match and BMM work today. 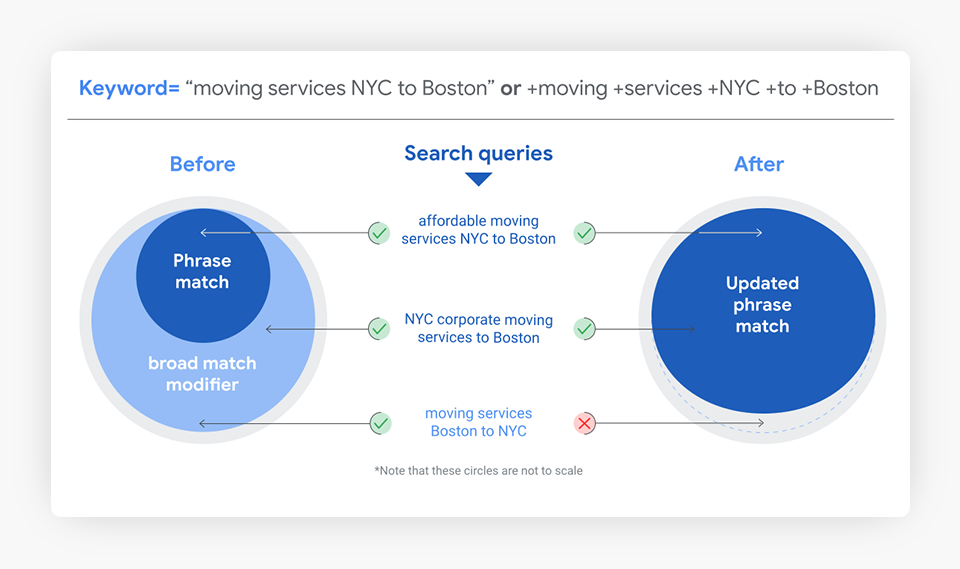 Overall, Google’s focus on intent should be good for lawyers and law firms, and it might even lessen the need to use some negative keywords. For example, if intent is used for the Phrase Match “Injury Lawyer,” one would not expect after this update that the search query “injury lawyer jokes” would lead to a match. This would lessen the need for negative keywords like “joke” and help in cases in which negative keywords should have been added but were not (at least under the current non-intent matching system). This is especially important since previously Google had announced that they were going to limit the Search Terms reporting and not show exact queries that led to clicks with low counts.

Accounts that are currently using Phrase Match and BMM keywords will transition to the new behavior starting in mid-February 2021. Google has more details on their Google Ads Help support page: “Making it easier to reach the right customers on Search,” which we encourage all lawyers who run Google Ads to read.