Multiple sources are reporting that Google has started sending out notification emails to webmasters through Google Search Console (formerly known as Google Webmaster Tools) informing them that their site has been enabled for the new Mobile-First Index. This update is a long time coming as Google first announced that they were moving to a Mobile-First index back in 2016. As we mentioned in our annual-review post in January, Google is ramping up this project and they announced last month that these notifications would soon be going out.

For those who are unaware, the Mobile-first index task is a shift in which version of a site is used for ranking in search results. Until recently, if a site had both a desktop and mobile version, the desktop version would be the one that determined how your site ranks against other sites.

If your site uses responsive design principles, you should be safe with this change as the mobile and desktop versions of your site are the same, but if you have a separate mobile site with less content than your main site, you may be in danger of losing ranking with this change.

Here is the text people are receiving: 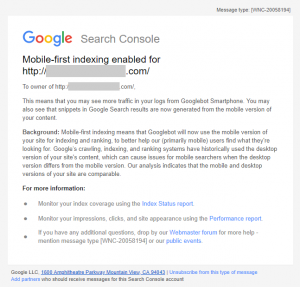 This means that you may see more traffic in your logs from Googlebot Smartphone. You may also see that snippets in Google Search results are now generated from the mobile version of your content.

Google has put up a list of best practices for mobile-first indexing which includes an indication on how this change will affect your site.

Note that this change is separate from the AMP initiative and that while AMP is good for mobile performance, it does not affect the mobile-first index directly. For this reason, it is important that you have a fully mobile compatible site, preferably using Responsive web design in addition to the AMP version of your site.

If you have an old mobile site that doesn’t match the content of your site, make sure you update to responsive design as soon as possible so that you are ready when you receive this notification for your site. Justia uses Responsive Design principles on all of our client websites and blogs so the websites of our clients are already ready for the mobile-first index, we also create AMP versions of all our client websites and blogs so that the mobile sites have the best performance possible.