Ever wondered what the most commonly filed civil suits are in your state? Want to know how the COVID-19 pandemic impacted activity in the federal court system? We have answers.

At Justia, we do more than help lawyers achieve their marketing goals. Through the Justia Portal, we strive to make the law and legal resources both free and accessible for all.

As part of this mission, we closely monitor data from the United States federal courts and operate Justia Dockets, a platform where we gather various filings and monitor cases and dockets across the U.S. District Courts and Courts of Appeal. We’ve recently been checking out the trends in federal courts from 2020 and decided to share some of our findings with you.

Which U.S. District Courts are the most active? What are the most commonly filed federal civil matters in your state’s federal district courts? Did the COVID-19 pandemic slow down federal court activity across the nation? Keep reading for these answers and more.

Did the COVID-19 Pandemic Slow Down Litigation in 2020?

Perhaps surprisingly, the answer to this is no…at least for federal courts. The total numbers for civil matters filed in U.S. District Courts nationwide were up significantly for 2020 when compared to 2019.

This seems to be largely due to a spike in Personal Injury matters filed in Florida District Courts. However, many other practice areas also did not experience a decline. Nationwide, Contract matters, Property Torts, Civil Rights issues, and Prisoner Petitions all either increased or stayed nearly the same in a 2019 to 2020 comparison. Meanwhile, Real Property and Labor matters saw a decline. 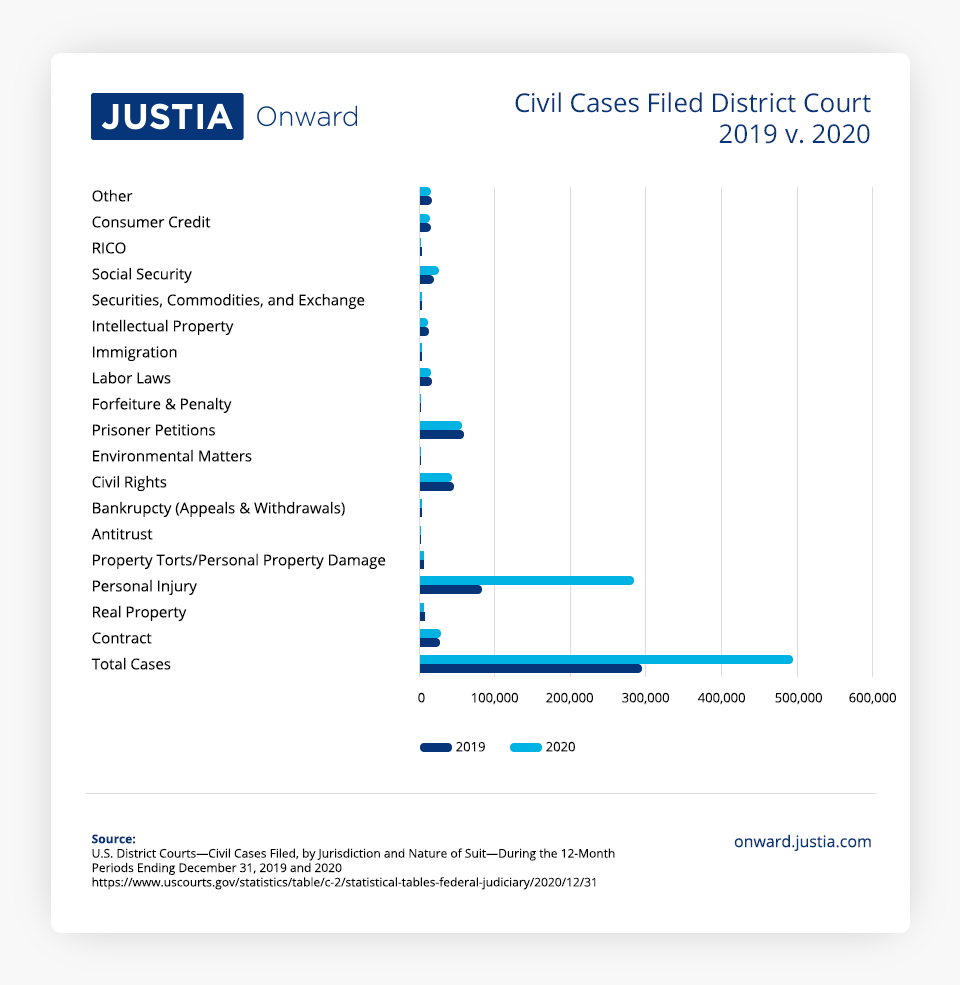 How Were Newly Filed Civil Cases Distributed in 2020?

To better understand how newly filed cases were distributed across the country in 2020, we looked to data outlining the civil cases filed in 2020 in each of the U.S. District Courts and grouped by the circuit courts of appeals. Most new matters in 2020 were filed in District Courts within the Eleventh Circuit, while the least cases were filed in the D.C. Circuit followed by the First Circuit. 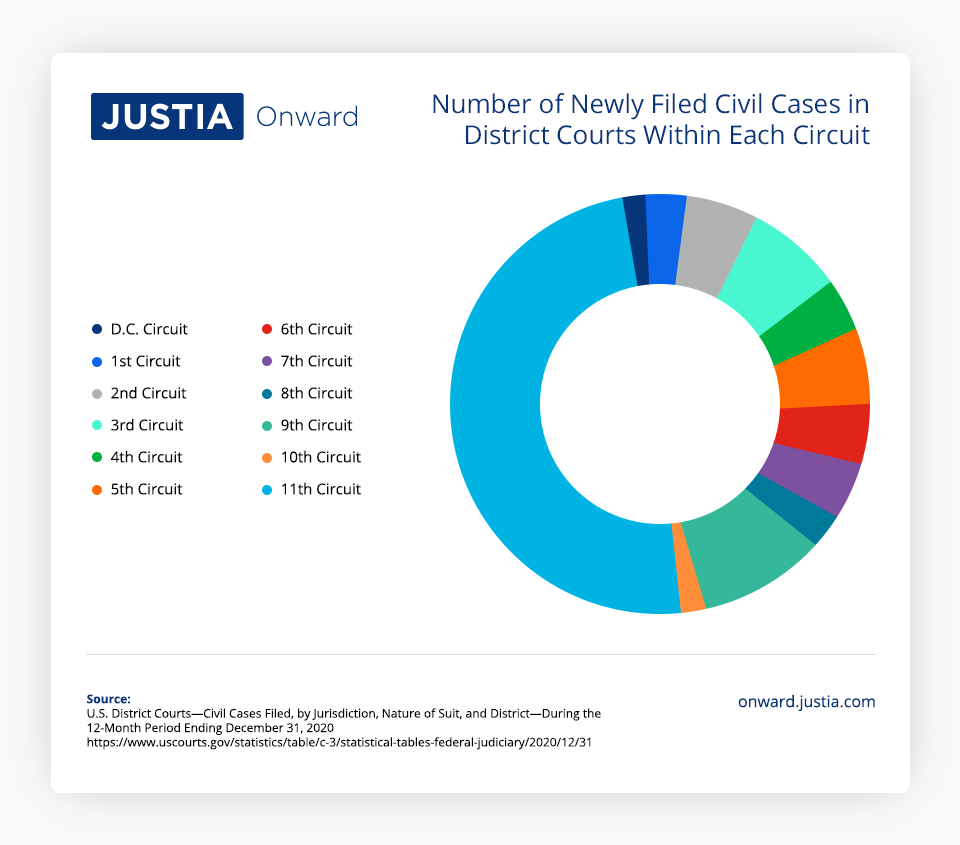 What Are the Most Active Federal District Courts for Civil Matters?

If you want another look at how civil matters were distributed, we also checked out the most active federal district courts for civil matters in 2020. 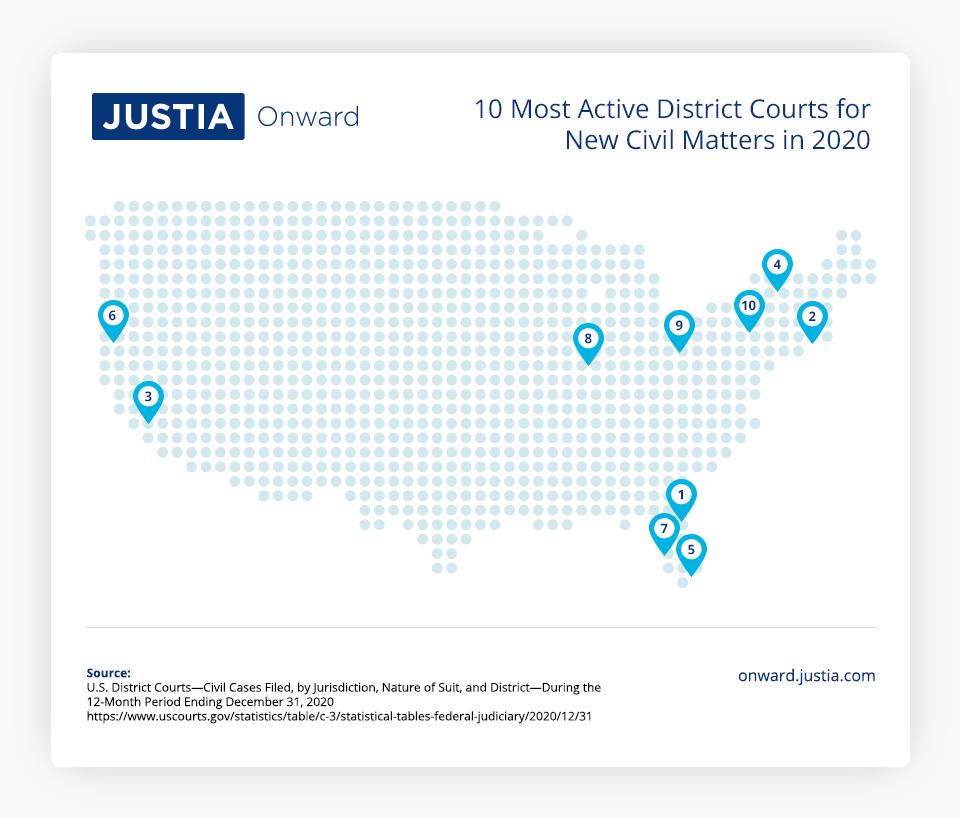 10 Most Active District Courts for New Civil Matters in 2020

What Are the Most Common Types of Civil Actions Filed?

If you have ever wondered what the most common action is filed in each state, we have the answers.

In well over half of the states, the number one civil action filed in federal courts is Prisoner Petitions, (which include Motions to Vacate, Habeas Corpus, Death Penalty, Prisoner Civil Rights Matters, Prison Conditions, and Mandamus) and in many other states it is the second most common action. In fact, in just over 75% of the states, Prisoner Petitions is in the top two actions filed.

Two Most Common Actions in Federal Court by State

What About Criminal Matters? 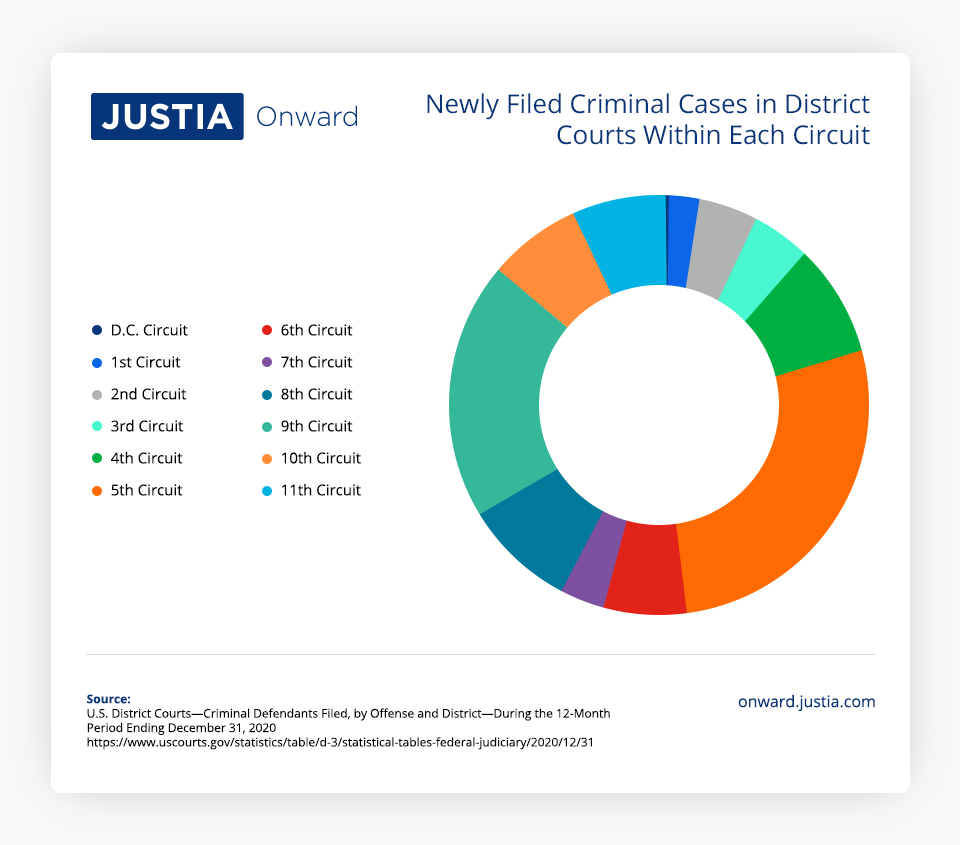 What Are the Most Active Federal District Courts for Criminal Matters? 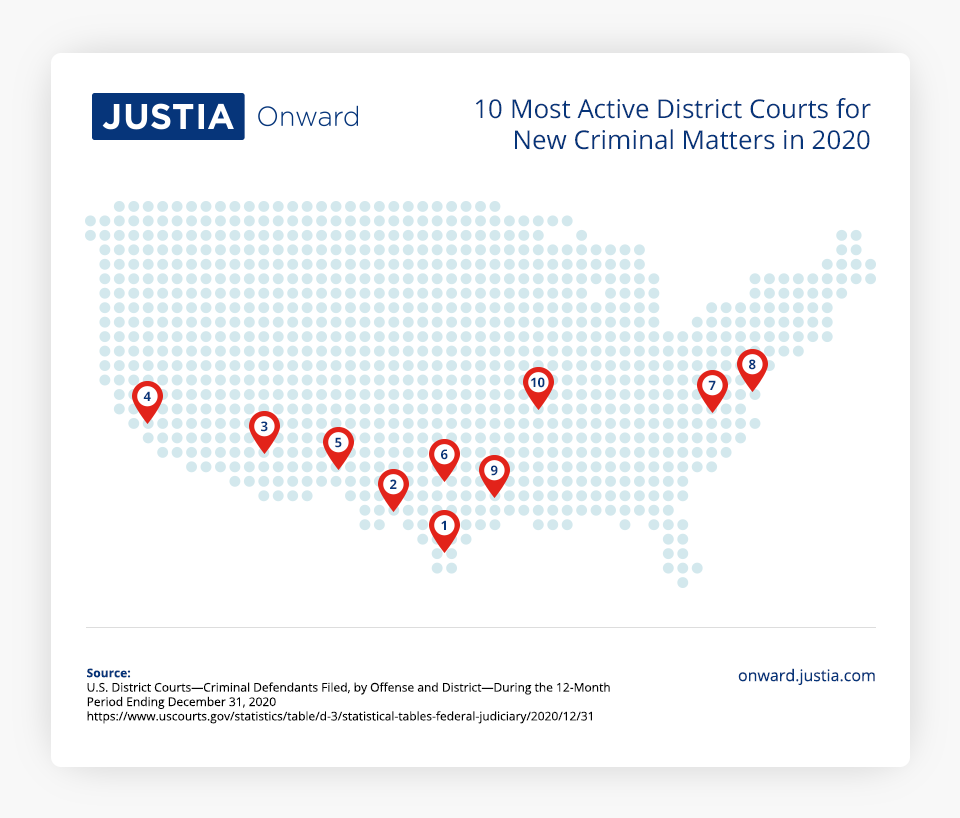 10 Most Active District Courts for New Criminal Matters in 2020

Keeping up with the trends in the legal industry can help you forecast the future of your practice. Are you in a hot area of litigation, or is your practice area declining?

Knowing this information can help you plan for the future of your business and also evaluate how and where to spend your marketing dollars. Plus, this data is also just interesting for many lawyers.

There will be more posts about legal trends from Justia Onward in the future. In the meantime, you can stay up to date on what is going on in the federal courts over at Justia Dockets for free (yes, no PACER fees!) and check out previous years’ data over at the United States Courts site.