After a long day at the office, there is nothing like relaxing with a TV show that helps you forget the stressful day. For many, television is the perfect company for fun and entertainment, even when the programs may relate to your chosen profession.

While the idea for television and TV programs may have been in the works for over 100 years, the technology experienced explosive growth beginning in the 1940s and 1950s. Since appearing in people’s lives, TV has become a major part of our society.

Millions of families across the globe gather around the television to watch sports, seek entertainment, gather information, or simply hang out. Additionally, many major television moments make major waves across communities, perhaps even bringing some activities to a standstill, while people watch the final chapter of a beloved series or observe major moments like the moon landing.

Even as television has grown and continued to expand, lawyers and the law have been consistent features in various programs. Beginning in the era of Perry Mason, audiences have been captivated by the administration of justice, the prosecution of crime, and the legal profession as a whole.

We invite you to take a moment to relax by checking out this list of 20 television shows about lawyers and the law. Then, take a look at what our clients, colleagues, and friends had to say about legal TV, their favorite shows, and their least favorite programs.

Before getting into our list, we send sincere condolences to the friends, family, and loved ones of Norm Macdonald, who recently passed away due to cancer at the age of 61. While Norm was a great comic, talk show guest, and newsman, he also was the original actor portraying no-nonsense attorney Roger Edwards on the television series NewsRadio. Norm will be greatly missed.

Plot: Patty Hewes, a brilliant but ruthless attorney, and her protégé Ellen Parsons are the faces of the Hewes & Associates law firm. Both attorneys work to fight corruption, but Hewes more closely adheres to a peculiar values system that benefits her own interests, while Parsons seeks a way to balance ethics and ambition.
Cast: Glen Close, Rose Byrne, Tate Donovan, and Ted Danson.
Genre: Drama
Network: FX
Seasons: 5

Plot: Andy Barber, is a respected Massachusetts assistant district attorney with a strong footing in the community and a beloved family. Everything changes when his son, Jacob, is accused of murdering his classmate, and Barber and his family are forced to reckon with the situation.
Cast: Chris Evans, Michelle Dockery, Jaeden Martell, and Pablo Schreiber.
Genre: Drama
Network: Apple TV
Seasons: 1

Plot: Jane is a smart lawyer fighting for the common good but battling low self-esteem. Deb is an aspiring model who is hyper-fixated on her appearance. Following an accident, Deb’s soul lodges in Jane’s body, forcing the separate two worlds to collide and teaching Deb that there is more to life than physical beauty and worrying about others’ opinions.
Cast: Brooke Elliott, April Bowlby, Jackson Hurst, Ben Feldman, and Kate Levering.
Genre: Comedy
Network: Lifetime
Seasons: 6

Plot: Billy McBride was a successful attorney with a promising career who hit rock bottom after being fired from the law firm he helped build. Now, Billy has the opportunity to revive his career and get revenge against his former firm.
Cast: Billy Bob Thorton, Tania Raymonde, Nina Arianda, and Julie Brister.
Genre: Drama
Network: Amazon Prime
Seasons: 3 (4th Season Expected This Month)

Plot: After 13 years of retirement, Alicia Florrick returns to practicing law after her husband is imprisoned for his role in a corruption scandal. She must decide whether to continue supporting her husband, in addition to battling envy, intrigue, and scandal to protect her family.
Cast: Julianna Marguiles, Matt Czuchry, Christine Baranski, and Makenzie Vega.
Genre: Drama
Network: CBS
Seasons: 7

How to Get Away With Murder

Plot: Annalise Keating is a brilliant criminal lawyer and renowned professor at Middleton University. Each year, Keating selects four of her students to become interns in her firm where they are forced to apply their classroom learning, while also uncovering the dark truths of a murder case.
Cast: Viola Davis, Billy Brown, Jack Falahee, Karla Souza, and Aja Naomi King.
Genre: Drama/Thriller
Network: ABC
Seasons: 6

Plot: Ben Matlock is a renowned Atlanta criminal defense attorney with one goal: demonstrate sufficient reasonable doubt to win the case for his client. After a thorough investigation, Matlock often confronts the real culprit in court and exposes him on the stand, resulting in an acquittal for his clients.
Cast: Andy Griffith, Linda Purl, Nancy Stafford, and Julie Sommars.
Genre: Drama
Network: NBC/ABC
Seasons: 9

Plot: Perry Mason is a distinguished criminal defense attorney from Los Angeles, typically tasked with defending those wrongfully accused of murder. Throughout each chapter, Mason introduces his team, his clients, and the facts of the investigation. He then proceeds to trial where new evidence and moral questions often arise.
Cast: Raymond Burr, Barbara Hale, William Hopper, and Ray Collins.
Genre: Drama
Network: CBS
Seasons: 9

Plot: Mike Ross is a brilliant college dropout that, through a series of interesting events, finds himself working as an associate attorney for Harvey Specter, despite not having ever graduated law school. Ross and Specter find great success in many cases but are forced to go to great lengths to hide the truth about Ross.
Cast: Gabriel Macht, Patrick J. Adams, Meghan Markle, Sarah Rafferty, and Rick Hoffman.
Genre: Drama
Network: USA Network
Seasons: 9

What Do People Think About Legal TV Shows?

We also asked our readers for their opinions on the shows in this list, as well as the legal genre in television. More than 97% of participants indicated they had watched a lawyer or legal television show and just over 95% of people indicated that they liked or enjoyed these legal tv programs. Here are their opinions on the best shows, as well as some of the least popular options: 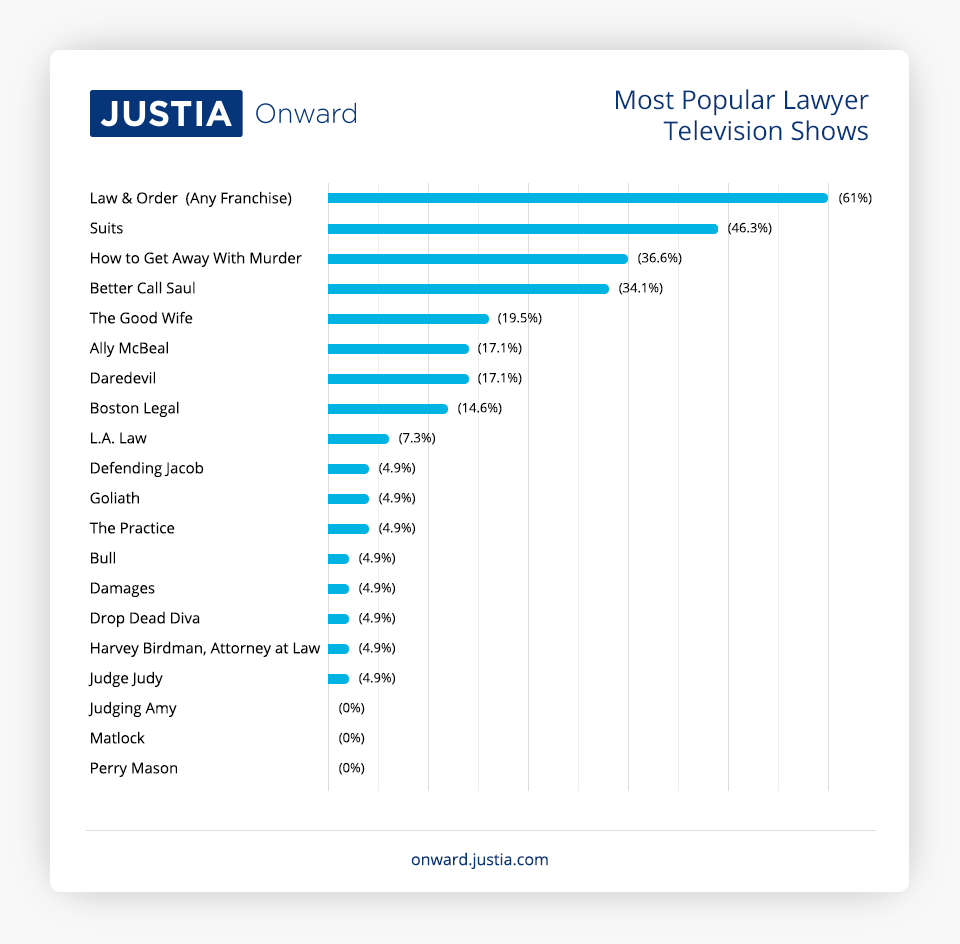 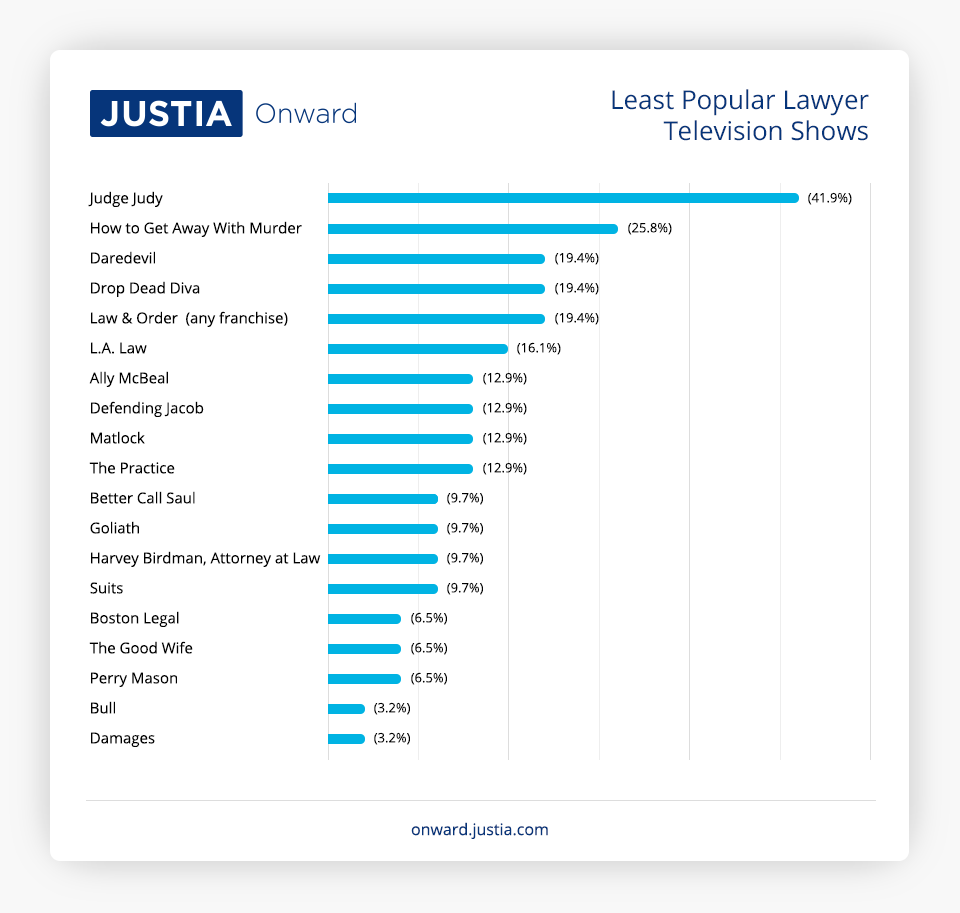 The American icon Judge Judy has one of the least popular television shows, at least amongst our Justia Onward readers: 41.9% ranked the show in their bottom three. Despite being amongst the most popular television programs chosen by the participants in our poll, How to Get Away With Murder was also ranked as the second least favorite show amongst readers with 25.8% placing it in their three least favorite lawyer television series. Drop Dead Diva, Daredevil, and Law and Order tied for the final shows ranked among our readers’ least favorite legal tv series, with 19.4% of respondents placing these programs in their bottom three choices.

Quick Takes From Our Readers

We also offered survey participants the opportunity to anonymously share the reasons why they do or do not enjoy legal television shows. Here are a sampling of their responses:

As discussed in our previous posts about lawyers in film and songs about law, movies, music, and television shows may not help your legal marketing strategies. Nonetheless, they remain great tools to help you take a break from the daily work of your practice. Perhaps, during these moments of resting and recharging, you will find a new perspective on your own firm. However, you will almost certainly discover that taking these moments of R&R can help you better focus on the work of the coming day.