This month marks the 235th anniversary of the U.S. Constitution, which was signed in Philadelphia on September 17, 1787. The founding document of our democracy continues to exert a profound influence over many areas of American life. Recognizing its significance, Justia provides several resources involving the Constitution and the protections that it confers to the American people.

The United States scarcely resembles the fledgling republic that emerged at the end of the 18th century. A cluster of 13 colonies along the Atlantic seaboard has turned into a tapestry of 50 states spanning the continent from ocean to ocean. Yet the Constitution devised by the Framers speaks just as powerfully today as it did in the 18th century.

The founding document consists of a preamble, seven articles, and 27 amendments. The first three articles outline the powers of each branch of government: the legislative, the executive, and the judicial. This tripartite structure contains checks and balances to prevent any branch of government from gaining too much power at the expense of the others. The remaining four articles address issues such as relations among states, the process of amending the Constitution, the supremacy of federal law, and oaths of office for federal officials.

The most famous amendments are the first 10, known as the Bill of Rights, and three amendments passed after the Civil War. Proposed by future President James Madison in 1789, the Bill of Rights outlines fundamental freedoms such as freedom of speech, freedom of religion, limits on searches and seizures, due process, and certain rights for people facing criminal prosecution, among others. Meanwhile, the Reconstruction Amendments (13th, 14th, and 15th) are sometimes considered the “Second Founding.” While the 13th Amendment ended slavery, the 15th Amendment gave African-Americans the right to vote. The Due Process and Equal Protection Clauses in the 14th Amendment provide the foundation for many civil liberties—and have become a battleground for some of the most contested issues today.

The Constitution: Text and Annotations 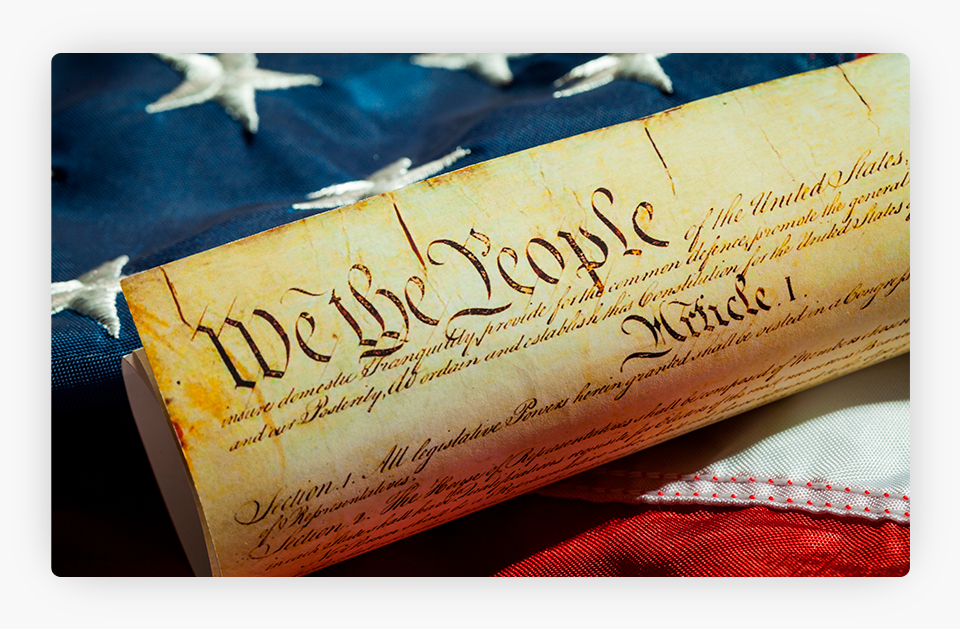 Justia provides multiple versions of the full U.S. Constitution. People who would prefer to read only the text can access both the articles and the amendments in this form. This allows them to appreciate the flow of the original language without interruptions. The text-only version also makes it easier to explore the relationships among different articles (or among different amendments) because they are all displayed on the same page. The text-only version of the amendments contains explanatory footnotes as well. These describe the path followed by each amendment through proposal and ratification. Among other things, the footnotes list which states ratified an amendment. Only 38 states must ratify an amendment for it to take effect.

On the other hand, some readers may want to closely examine the meaning of a certain provision in the Constitution. To meet their needs, Justia provides an annotated version of the document. The annotations describe how the Constitution has been interpreted over time, focusing on Supreme Court decisions reviewing the laws and regulations enacted under its authority. For example, a reader who wants to learn more about the powers of Congress can navigate to Section 8 of Article I in the annotated version. They can find clause-by-clause annotations for each enumerated power there, such as the taxing and spending power, the commerce power, the war power, and powers involving copyrights and patents. 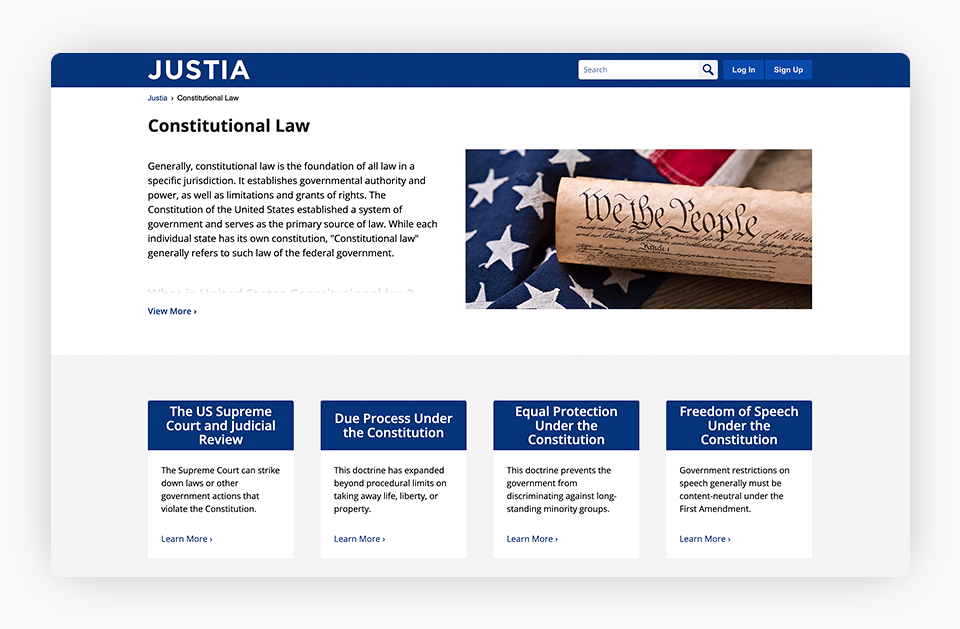 The principle of equal protection sometimes overlaps with due process, since each is found in the 14th Amendment. The Equal Protection Clause initially was intended to prevent racial discrimination against African-Americans, but it has extended much more broadly over time. The Supreme Court has developed three standards of review for equal protection challenges: strict scrutiny, intermediate scrutiny, and rational basis. Since the burden imposed by each standard varies greatly, the level of review may play a key role in deciding a case.

One of the most complex constitutional doctrines is the right to freedom of speech, which arises from the First Amendment. The Supreme Court has defined speech broadly, ruling that it extends even to “symbolic speech” that consists of non-written expressive conduct. A key distinction in free speech doctrine separates content-based from content-neutral regulations. While content-based restrictions are generally unconstitutional, the government has much more leeway in imposing “time, place, and manner” restrictions that do not involve content. 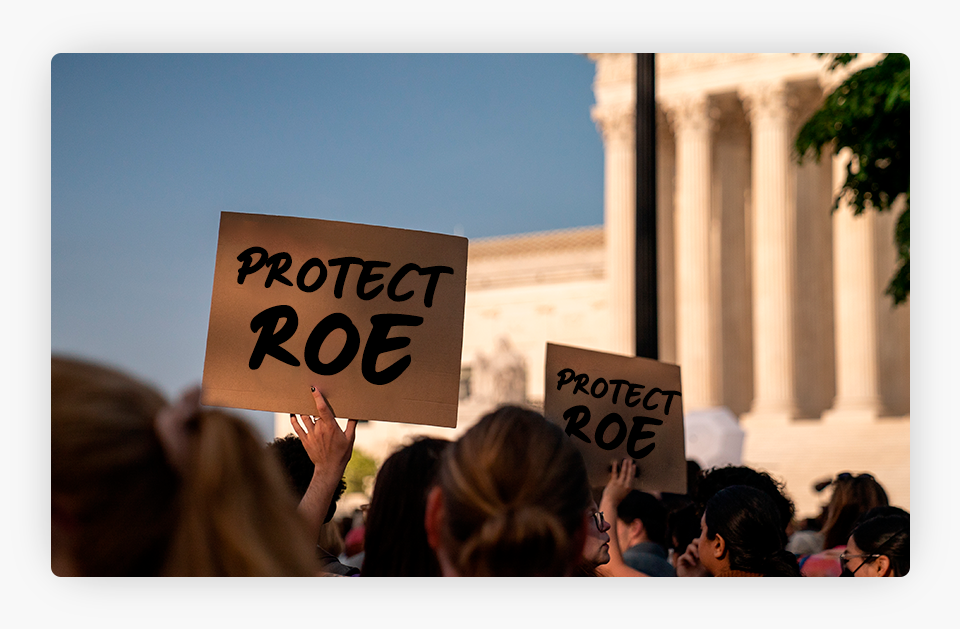 Certain topics arising from constitutional principles have spurred fierce debate in recent years. These include reproductive rights. In the 1973 case of Roe v. Wade, the Supreme Court ruled that privacy rights arising from substantive due process allow a woman to terminate a pregnancy. This year, however, the Court overruled that decision in Dobbs v. Jackson Women’s Health Organization, which restored the power to regulate abortion to the states. Justia provides not only a general discussion of abortion and reproductive rights as they have evolved over time, but also a state-by-state survey of abortion laws as they stand in the aftermath of the Dobbs decision.

Arising from the Second Amendment, the right to bear arms also has received intense scrutiny as gun violence has surged across the country. The discussion of gun rights in the Constitutional Law center explains how the Supreme Court has shifted from a “collective rights” theory of the Second Amendment to an “individual rights” theory. Framing the right to bear arms as an individual right limits the ability of a state to restrict the possession and use of firearms. However, states do not completely lack options, and a state-by-state survey of gun laws describes the rules that apply in areas such as firearm licenses and registration, background checks, and open and concealed carry. The survey also explains which people are prohibited from possessing firearms in each state.

Constitutional interpretation can be a polarizing topic. The stakes are high, since the Bill of Rights and other provisions affect many key areas of modern life. Exploring the text of the Constitution and how it has been interpreted over time can help a citizen understand ongoing debates and develop their own perspective. Justia is committed to making the law accessible to ordinary people. This effort starts with the highest law of all.