When using a website or blog to market your law firm, you should be careful to avoid using language or portrayals that your state bar considers "misleading." Three areas in which attorneys should be particularly careful about misleading material include: (1) language related to fees, including what prospective clients are and are not responsible for, (2) statements that can be construed to predict success, and (3) the use of actors to portray lawyers or events leading to lawsuits.

In previous posts, we have addressed the ethical standards that may apply to various aspects of online lawyer advertising, such as required disclaimers, discussion of client matters, and prohibited language. Many of the guidelines in this context relate to a broader rule, in force in most states and adapted from the American Bar Association’s (ABA) Model Rules of Professional Conduct (“Model Rules”) Rule 7.1, against any communication that could be considered “misleading” to prospective clients.

While common sense might dictate that this rule encompasses any statement that is patently false or obviously confusing, and many states have provided some general guidance in this area, it can be difficult to determine exactly what kind of language your bar association may prohibit on this basis. Each jurisdiction has its own interpretation of this standard, and you should always consult your state bar rules to ensure that you are in compliance. To help illustrate the ways in which this concept can potentially be implemented, we have provided specific examples from a few states below.

As reflected in comment 3 to Model Rule 7.1, a primary aim of the general prohibition on misleading advertising is to eliminate communications that may suggest guaranteed case outcomes to prospective clients on the basis of factors such as a firm’s past successes, an attorney’s credentials, or fees. On the topic of fees, therefore, in several states such as Texas (Rule 7.04(h)) and Pennsylvania (Rule 7.2(h)(1)), when lawyers advertise contingent fee arrangements, for example, they must include a disclaimer stating that clients may still be responsible for other costs of filing a lawsuit, such as filing fees, administrative fees, and so on, if they apply. That is, even if an attorney’s fees are contingent, there may still be additional costs for which the client is responsible, and the advertising attorney may need to disclose this fact.

The Ohio Rules of Professional Conduct (“RPC”) take this a step further, and provide even more specific guidance on permissible language in the legal fee context. Comment 4 to Ohio RPC Rule 7.1 states that terms such as “cut-rate,” “giveaway,” “discount,” and “lowest” are per se misleading when used to describe fee arrangements. In other words, any language stating or implying that a special deal or discount may be available to prospective clients would seem to violate the rule in this jurisdiction.

As such, and as reflected by the example above, it is always critical to check the rules in your home state to determine whether, in addition to a more general rule related to contingent or other fee arrangements, specific language has been deemed to violate ethical guidelines.

As referenced above, while a wide variety of statements may be problematic in light of the general prohibition on misleading legal advertisements, of particular concern to state bar associations are statements that suggest particular case results. Though we have previously discussed the fact that making such claims indirectly can be impermissible (as in the case of certain statements regarding past successes unless accompanied by an appropriate disclaimer), it also is worth emphasizing that it is equally problematic to make explicit claims predicting favorable case outcomes in the future.

The comments to Florida RPC Rule 4-7.13 address this issue, explaining that phrasing such as “I will save your home,” or “I will get you acquitted of the charges against you” is misleading because it purports to guarantee a specific outcome. However, the comments go on to discuss acceptable variations and modifications, which include statements describing the legal process, such as saying that an attorney will “protect” a client’s rights or assets. Similarly, aspirational statements, such as “I am dedicated to recovering damages on your behalf” (rather than saying “I will recover damages on your behalf”) are generally permissible. Objective conclusions describing the state of the law on a given topic are also allowed.

In sum, and as described in the comments to the Florida rule, any language explicitly predicting success is likely best avoided, but is also easily remedied through minor wording modifications. 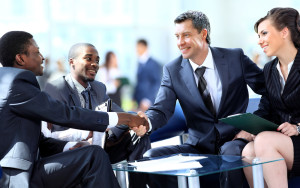 Another area where attorneys can potentially run into trouble in the legal marketing realm relates to the use of actors to portray lawyers or events leading to lawsuits, given the potentially misleading nature of this approach.

Once again, the comments to Florida RPC Rule 4-7.13 are instructive here. They explain that any recreation of an event such as a car accident must contain a “prominent” disclaimer clearly stating that the reenactment at issue is not real. The same rule applies to actor portrayals of attorneys. The use of authority figures like judges or police officers (or even actors playing them) to promote a law firm is not permitted.

Other states such as Texas (Rule 7.04(g)) and Georgia (Rule 7.2(c)(3)) have similar rules related to actors portraying attorneys in legal advertising. Perhaps due to the particular risk that dramatizations will be misleading to prospective clients, many jurisdictions have addressed this issue, so it is important to check your state’s rules on this topic.

In sum, it can be difficult to know exactly what your state bar may consider to be “misleading” legal advertising material. The Model Rules, along with many of their state analogs, provide conceptual guidelines, but it is not always clear whether the specific language you are considering will run afoul of those standards. Fortunately, a number of state bar organizations have provided examples of the particular wording choices that fall within the ambit of this rule, and that may help you avoid making any misleading statements in your legal marketing content.

Disclaimer: The information in this blog post (“post”) is provided for general informational purposes only, and may not reflect the current law in your jurisdiction. No information contained in this post should be construed as legal advice from Justia Inc. or the individual author, nor is it intended to be a substitute for legal counsel on any subject matter. No reader of this post should act or refrain from acting on the basis of any information included in, or accessible through, this Post without seeking the appropriate legal or other professional advice on the particular facts and circumstances at issue from a lawyer licensed in the recipient’s state, country or other appropriate licensing jurisdiction.